Oh, the infamous “Into the nights”! IHG has IHGeed itself with that promotion. Giving lucrative offers, changing them midstream, changing them back in the end. The good news is I got all 3 promotions for various family members completed and received my bonuses in the end.

It only took about 20 phone calls (maybe more), lots of frustration and about 2 years of my life. But hey, totally worth it to get those nights at the beach. I will make darn sure everyone enjoys them, whether they like it or not!

As you probably know, IHG has introduced a similar promo called  Set Your Sights (click to register), valid for stays from January 1st-April 30th. Whether you decide to participate or not is up to you. I have written a post on things you should  be aware of, so  won’t be repeating myself. You may also read this post on Travel is Free that does a good job at explaining Set Your sights  promo.

Here is my personalized offer: Pass. My husband and in-laws have gotten a similar offer as well. We have a lot of IHG points at the moment, so I probably would not participate regardless. Most new members’ offers were far more lucrative, and many need to only stay 3 nights in order to get 50,500 points. Here is a typical offer: 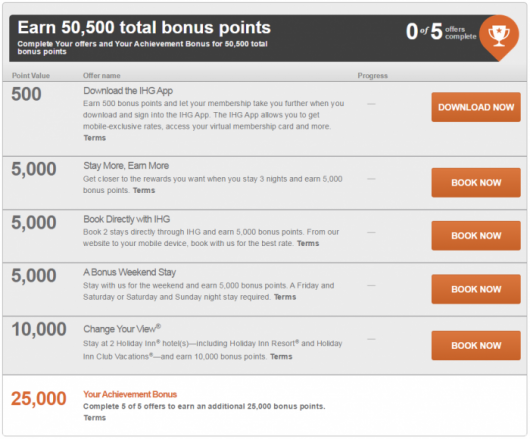 So, if you don’t mind potential frustration and have time to make phone calls, it could be worth it.  I encourage you to at least consider it if you have planned hotel stays in the spring.

Now on to the title of my post. Enjoy!

I wrote before how I puzzled all of the  “Into the nights”  hotel stays to make sure we hit the promos on all 3 accounts. Well, evidently, my puzzling skills need some fine-tuning. If this hobby had  a comedy TV show, this particular occurrence would make for a hilarious episode. If only there were a Hollywood producer who also happened to be a miles and points nerd. Nah, that would never happen.

So, I will do a mock script for a comedy pilot called “Give me the nights!” (get it?)

Not only is it based on real events, but this is exactly what happened. Names have been changed to protect the innocent.

Elsa: Her meek mother-in-law who goes along with all of Julia’s ridiculous schemes

It was  yet another regular day in Julia’s house. After she was done churning butter, she started  looking over the reservations for the infamous IHG promo “Give me the nights!” She was very proud of herself for puzzling it all together, except…  she has discovered one problem.

Turns out, she’s scheduled 2 hotel stays in her mother-in-law’s name on the same Saturday and in different cities. One was for Elsa’s son, where her name was listed first, and another for a Holiday Inn in St. Simmons, where she was heading to for  a vacation with Julia and her family. The promo specifically said that 3 separate Saturday stays were required.

Given the level of “ease” with which IHG has been handling this promo, Julia knew it would spell disaster. Fortunately, there was a workaround. That very weekend her cousin-in-law Anna was heading to a Holiday Inn in Fort Myers. Julia treated her to a getaway on points for Friday and Saturday nights. All she had to do was switch the Saturday reservation to a paid one, and all would be taken care of.

And that’s exactly what she did. Everything had to be done right away because it was Thursday, which was the last day the points reservation could be cancelled without penalty. She notified Anna of the change and headed out to Elsa’s office so she could book the reservation through her mobile IHG app (promo’s requirement). All set!

Except, later that day, strange things started happening. All of a sudden, she got a cancellation of the paid night reservation. Julia called the manager of the hotel and wondered if they knew what happened. The guy had no clue and just told her to book it again. Of course, it had to be done on Elsa’s phone…again. When Julia got ahold of her mother-in-law, she found out that Elsa has mistakenly cancelled the reservation because she thought that’s what Julia wanted her to do. Nope, but mystery solved.

Except an even stranger occurrence has come up later in the day. Julia got an email confirmation for the same hotel, but for Thursday night. Julia knew she was crazy, but not that crazy. Apparently, Elsa didn’t do it either. Not to mention, the rate was AAA, and  Julia is way too cheap to pay for that membership. Has the IHG app been naughty? What’s worse, it was too late to cancel it without penalty.

Julia called the hotel again and spoke to the same manager telling him about weird ghost AAA booking. The manager said he has never heard of a reservation showing up out-of-the blue like that. Thankfully, he said he would cancel it without penalty. Julia had no clue that hotel employees had the power to override IHG terms. Who knew?

This info would come in handy when she  finally got around creating her “miles and points” blog. She heard that everyone makes at least $10,000 in credit card affiliate commission in their very first month. Wow!

Anyway, Julia was relieved that all the puzzle pieces finally fell into place. Except…later on she was talking to another relative and found out that Anna has decided to head on over to Fort Myers a day early and made a separate paid reservation. “Does she have a AAA membership?” Julia exclaimed. Turns out that she did.

Anna was on her way to the hotel, and her reservation was cancelled. Apparently, she called IHG and just gave them Elsa’s number when making her booking so they would be all under the same name. Since Julia manages all IHG accounts in her family, she was the one to receive the confirmation email.

Julia got  ahold of Anna on  her cell and told her that she would just use points for her Thursday stay. Fortunately, the award rate was available, and she was able to book it on the spot. Anna insisted on paying for Saturday night stay herself, and Julia reluctantly agreed.

Later on, Julia got an email from Anna. It said that the same manager told her it was the weirdest day he has ever had on that job.

Readers, do you think it would make for a fun comedy episode?